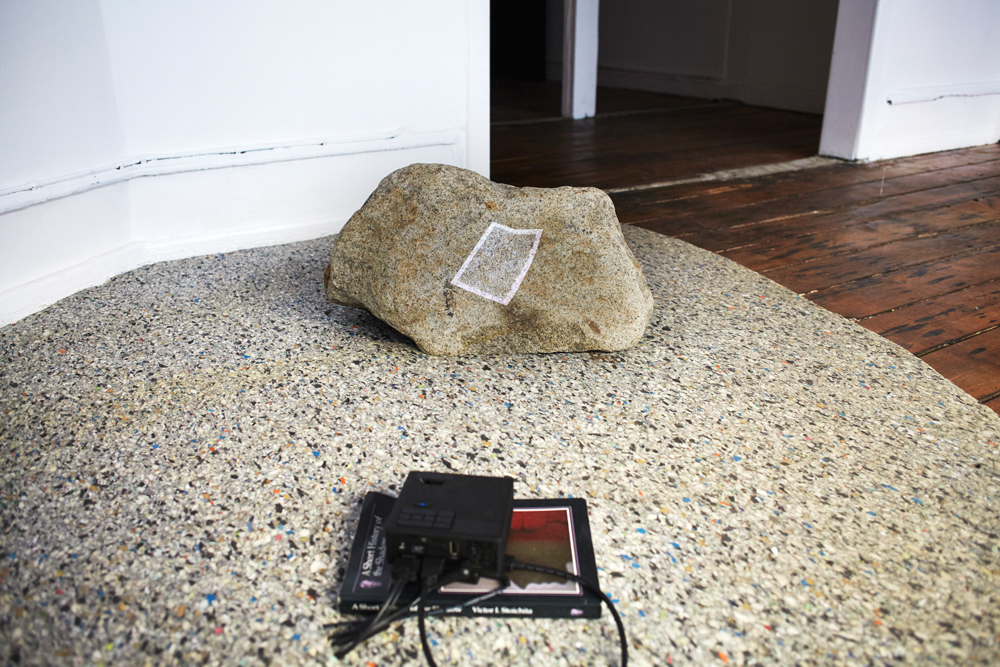 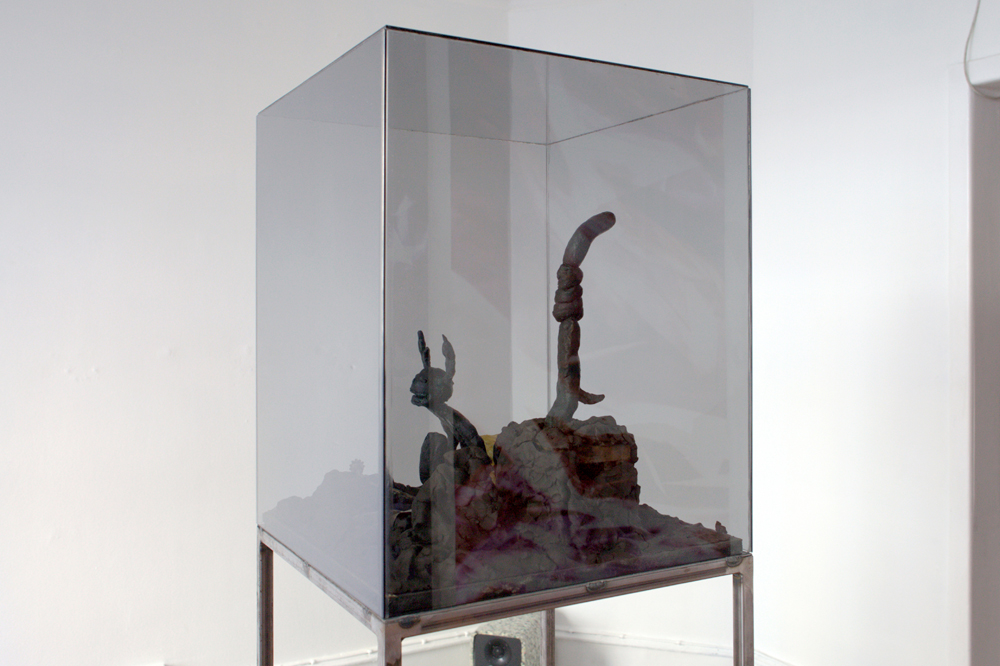 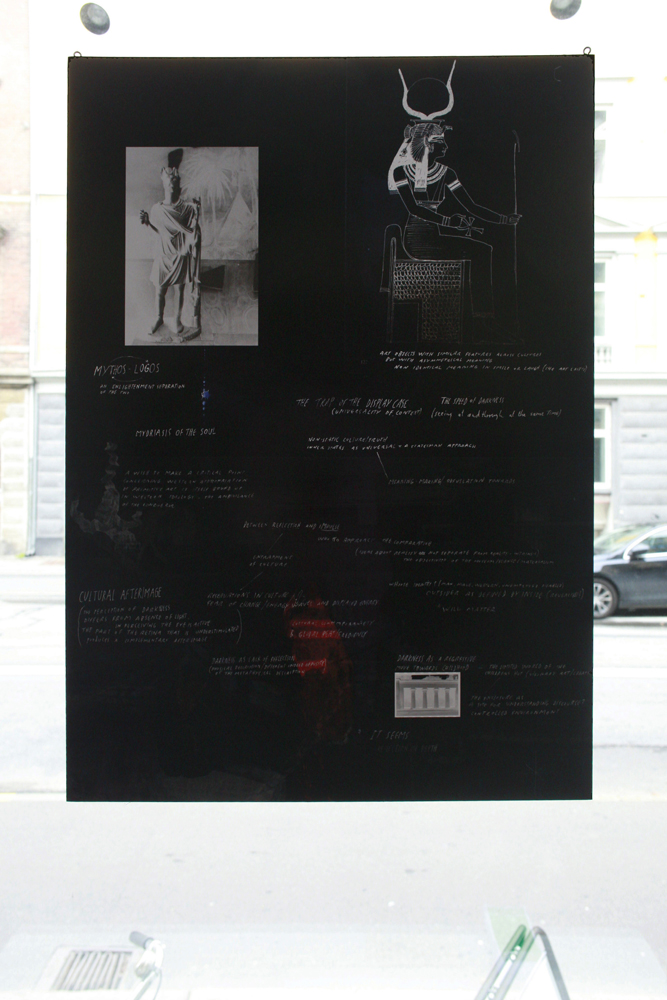 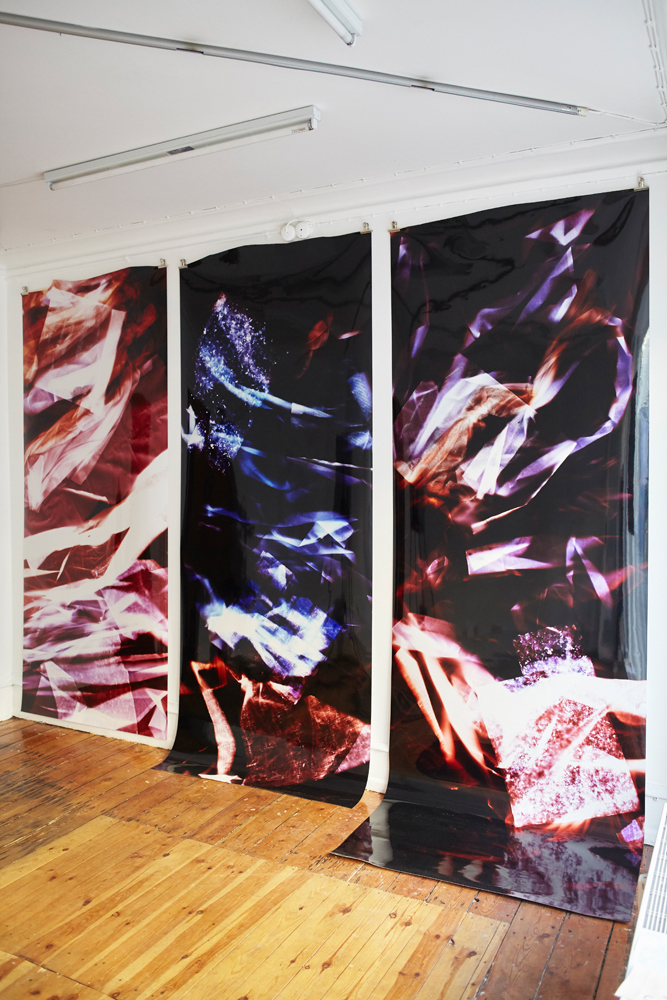 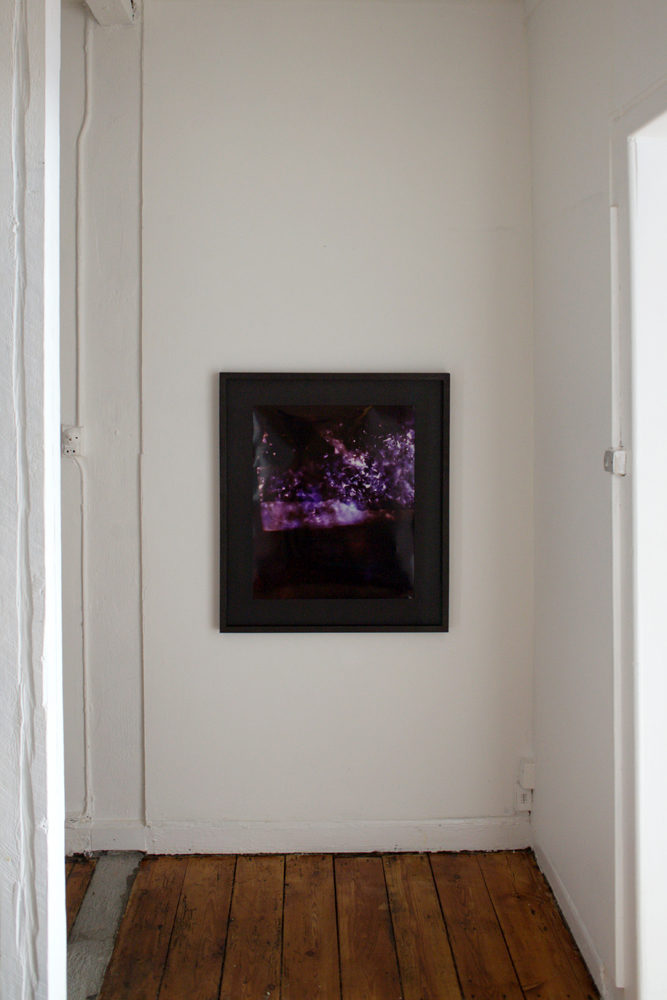 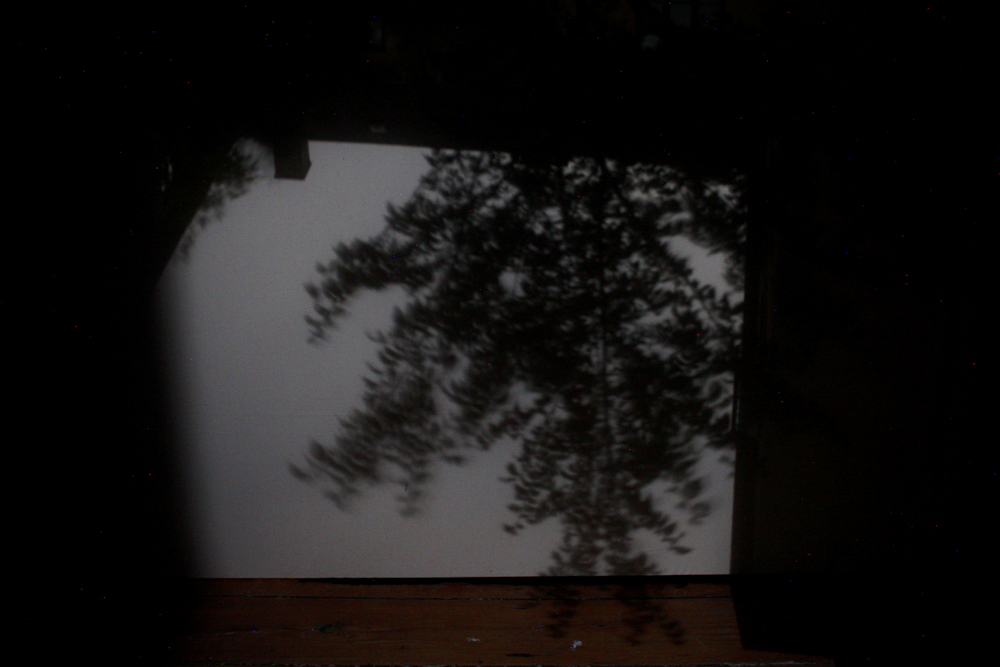 The exhibition Notes on Darkness explores how we perceive Darkness through three artists’ reflections. Laila Svensgaard, Elisabeth Molin, and Christian Bang Jensen present a combination of new and older pieces that together form a constellation of works that is activated on the edges of sight.

Art has throughout its history been connected to vision, visuality and expanded modes of seeing as a modern and historical discourse. In fact, as Guy Debord and Michel Foucault have argued, visuality becomes a modern fantasy of spectacles or ocularcentrism. An appetite for visuality only continues today through new progressive technological developments and their interlocking to a commodification of our attention and sight. Art and art criticism have long ago coupled the Western, modern praise of visuality with a rational and progressive capitalistic logic, where representation and the promotion of visibility destabilize language, quotation, and expression. Consequently, artists have attempted to hack, appropriate, deceive, and disrupt this particular flow and fantasy of visuality. The exhibition Notes on Darkness aims to follow this line of thought and exit the grand visibilities in favour of entering the dark edges of sight. What exists between the mechanism of sight, its historical and technological development, and its social and discursive constructs? Can darkness and its limiting effect on sight open up an exploration of transgression, unstable forms, and lingering perceptual experiences, creating a new politics of sight?

French philosopher Jean-François Lyotard describes that below the “seen” order of things lies a matrix of unseen invisibilities; a place where forms transgress into fluid, amorphic, and dysmorphic things in moments between construction and deconstruction. Lyotard is interested in what happens in the distortion of discourse, brought about by a lack of reference and a deformation of signification; an opening beyond the commodified, directed, and significant order of things in our world. Darkness offers a disruption in the production of meaning and opens up fantasies and delusions, flourished from the lack of the figuration and constitutive elements of representation itself.

The artists explore darkness through three different artistic approaches. In her installation piece ‘Sfumato’, Laila Svensgaard takes us into the first evolutionary mechanism of image production - the camera obscura - where images appear in the dark, simulated by a tiny spill of light. In Italian, ‘Sfumato’ means ‘to tone down or to evaporate like smoke’ and it refers to a renaissance painting technique, where a fine shading produces a soft transition between colours and tones, making subtle gradations from areas of light to areas of dark. Elisabeth Molin’s piece ‘Notes on Darkness’ (from which the exhibition borrows its title) opens up to the wonders and speculative dimensions of how we have culturally and linguistically constructed the notion of darkness. Her artistic film montage explores darkness from multiple points of view, combining handpicked personal stories with theoretical accounts of darkness inbuilt ambiguities and uncertainties. Christian Bang Jensen explores the discourses of darkness and light by an idiosyncratic deconstruction of the objectivity of light and visibility through a sculptural piece and a wall-based text. The piece is a paradoxical attempt to give priority to the contemplation of the unknown and the irrational within a framework of research and knowledge production. Bang Jensen questions what cultural production means and how it is possible to construct knowledge and create discourse around cultural artefacts.

The constellation of works in the exhibition attempts to escape the urge to visualize and contemplate immediately and clearly, to enter and open up a perceptual space of fluid uncertainties and transgressions. Vision is explored and deconstructed in its social and historical context as an enlightened conception, outsourcing the perception and experience of darkness. The exhibition invites viewers on a reversed trip into alternative visual regimes, de-routed from modernism’s construction of vision, to reflect upon what happens when sight is withdrawn from the bright and flickering illuminations that grab our attention, commodify vision, and exhaust the exploratory part of our sight.

Laila Svensgaard. Perception and the subjective experience of time and space are central concepts in Svensgaards practice, which combines photography, drawing, text, and sound. Inspired by the materials from which she works, and informed by ideas in philosophy and science, her work often has a poetic and existential focal point, growing from an interaction and discursive tension between a concrete "real" and an imaginary "unreal".

Christian Bang Jensen’s work deals with the act of collecting and discourses of knowledge production in various spaces and institutions. Bang Jensen’s work is often composed of different elements and takes shape as a kind of extended collage which incorporates sculpture and installation, often utilizing museum collections. Bang Jensen explores how so-called ‘rational modes’ of thinking are disrupted by associative mind processes and objects, art works, and materials that aspire to underline qualities of animism and rhizomatic connections to create different regimes of knowledge production. Bang Jensen’s practice is invested in an underlying interest in cultural appropriation, mythology, and history.

Elisabeth Molin’s works act like footnotes to reality. They help broaden our visual understanding, offer clarity, and reveal what is hidden or overlooked. Molin deals with slips in perception, time warps, and bodily displacements, often materialised as video, photography, installation, and performance. Molin’s works look beyond the seamless ideology of the world we live in and find multiple jarring contradictions, dislocations, asymmetries, and quiet injustices.

Elisabeth Molin holds an MA Fine Art from the Royal College of Art, London. Molin has had exhibitions at Maw Gallery and ISCP (United States), the Danish Cultural Institute, and Zona Mista (United Kingdom) among others. She has participated in residency programs at ISCP (United States), CCA Andratx (Spain) and Cité Internationale des Arts (France).

Iben Bach Elmstrøm works with various curatorial outputs including exhibitions, educational programs, and cultural-political debates. Her approach to exhibition making is formed by research with a strong emphasis on context and site. Her research topics have recently been engaging with questions around value making and financial speculation (‘Exchanging Money for Working Space or Money Equals Working Space’ at SixtyEight Art Institute (Denmark)), contradictions and complexities of current Western identity politics (‘The Emperor is Naked’ at The Ski Club Milwaukee and The Waiting Room (United States)), and most recently how identity is shaped by individuality and our current neoliberal working culture (‘The Object is to Change the Soul’ at Heartland Festival - Egeskov Slot (Denmark).