by THE WINTER OFFICE

Organized by Lise Grüner Bertelsen for THE WINTER OFFICE 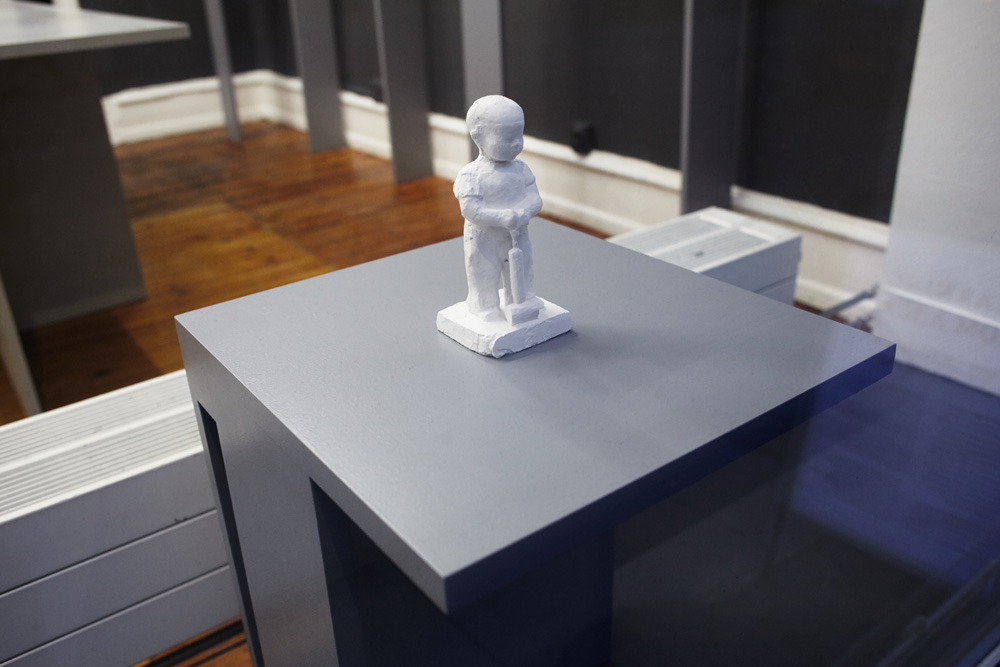 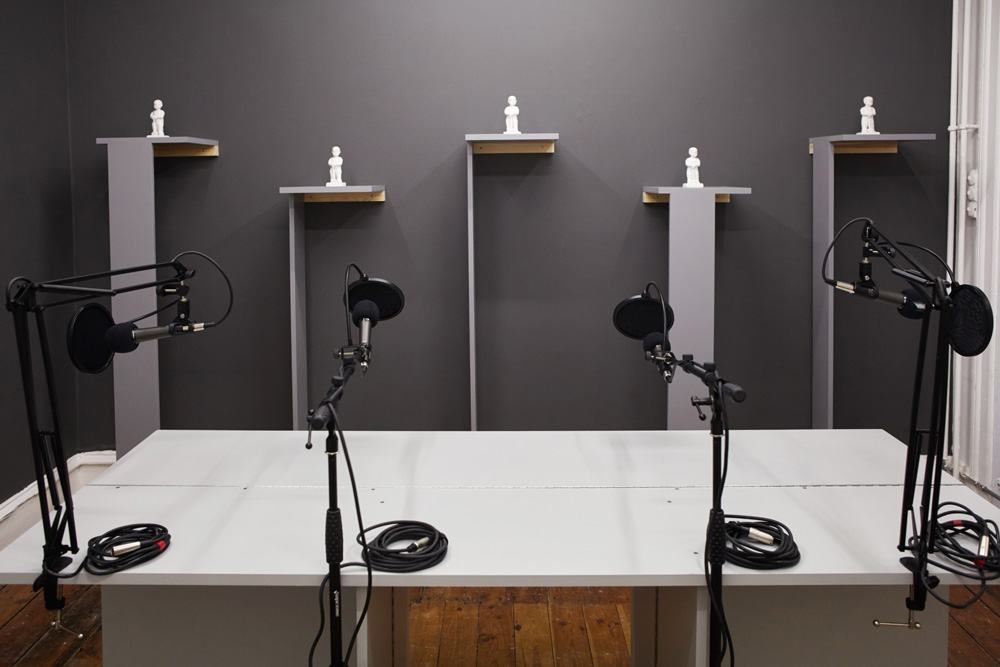 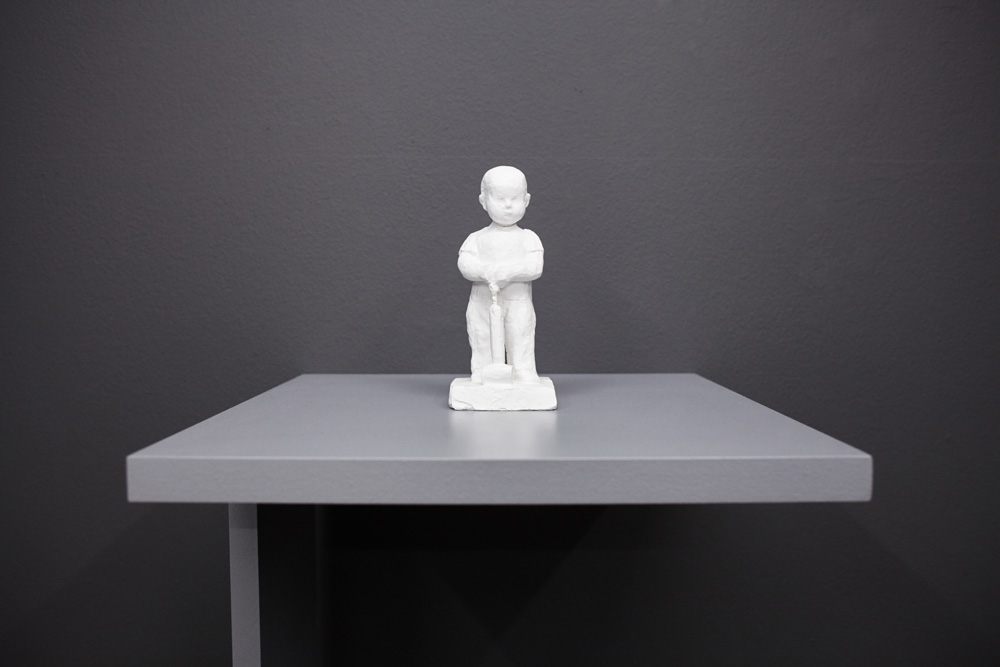 This research-based exhibition looked to the state and standing of artist-run spaces in Copenhagen, with the vision to foreground new and critical approaches between creativity, urban planning, and development for the future of artistic spaces in the city. The Winter Office (TWO) is an artist group and work network consisting of artists, curators, architects, designers and social scientists who are either based in or connected to Copenhagen.

TWO in addition invited other artist-run spaces in the greater Copenhagen area to share written answers based on their spatial ‘footprint’ in the city and exchange knowledge about their use and experience of their spaces. The work group also developed a ready-made podcasting studio, which came together in two separate sessions to record interviews, facilitated by Lise Grüner Bertelsen, curator of the exhibit for The Winter Office, with Charlotte Præstegaard Schwartz, curator of A.N.A, and artists Kirsten Dufour and Finn Thybo Andersen, who together served as hosts of the podcast sessions on behalf of A.N.A. The podcasts are available to listen to on Soundcloud.

Too many creative environments and artist-run spaces in the city lose their existence to ongoing urban development. Cities in general have limited or understudied visions for how to generate new urban plans for creative spaces (those who do, sometimes rush to implement them with little or no community-oriented consultation). Moreover, rethinking the development of creativity in the city through citizen participation, gentrification studies, and mixtures between community/market oriented development is of enormous importance–especially–as we continue to witness development booms. There is a major problem in new building construction that is consistently blind to creative space needs and by continuing to ignore them, relegates creativity to normative and vulnerable models that lead to the tapping of fringes or outright gentrification of historic communities to further speculation.

In addition to the lack of democratic and affordable creative space, we need to focus on what social, political and economic consequences current development is having on who gets to inhabit creative spaces. It is important to preserve existing buildings rather than to tear down and replace them with characterless housing complexes. However, artistic spaces also need to challenge new development visions and should help define new constructions, whose self-awareness for creative space and spatial justice is evident in their architecture. Even more so as it mixes and expands justly the definition of affordable housing in the city.

The artist Astrid Noack (1888-1954) is known for being one of the first artists in Denmark to embrace the idea of a live-work studio in the inner-city. From 1936 to 1950 she lived and worked at Rådmandsgade 34 in the Nørrebro area of Copenhagen, taking part in the everyday life of the area. Having lived, worked and studied in Paris for many years, she often received visitors from abroad, lending the space not only even more vibrant life, but also making a deep impression on the Copenhagen art scene of the time.

Walking into the backyard of Rådmandsgade 34 is like entering a time warp that takes you back to a very different, pre-gentrification Copenhagen. In 2010, a community of artists helped launch the Rådmandsgade 34 Foundation to help preserve the artist’s building, to offer studio spaces, and in addition to provide an exhibition space. Today, her memory and space is represented by the artistic/curatorial collective Astrid Noack’s Atelier (A.N.A), an association of artists, art workers, architects, composers and local residents which produces exhibitions and other cultural projects.

Based on Astrid Noack’s life, thinking, and hospitality, A.N.A is an experimental art space that aims to embrace ‘the local’ as a vantage point to the world surrounding us, bringing together neighbourhood kids with international artists, and focusing on political issues in contemporary life. A.N.A strives to be an active and integrated part of the community as it is, and through interaction with the users of the backyard wishes to preserve and gently renovate the place for future generations.

From 2010-18 A.N.A has implemented a number of experimental programs in the studio/atelier building. All the activities at hand received generous economic project support and the initiative has hosted a large number of volunteers, becoming well known in a broader cultural context. Astrid Noack's international vision and strong local presence in the neighborhood around Rådmandsgade 34 has also created a strong series of partnerships and inspiration with other artists, curators, and institutions.

ANA AIR is an artist in residence program, which invites foreign artists to develop participatory and dialogue-based projects based in Astrid Noack’s studio, the corresponding backyard and the surrounding area. All ANA AIR artists work under the premise that their project be relevant and beneficial to people in the neighborhood and local community. Their stay is research-based, and typically results in a physical manifestation, such as a concert, exhibition, performance, workshop or screening. All events are public.

ANA LOCAL is a program that connects local artists with people who live and work in Nørrebro. The program focuses on projects that actively engage in the social context, the place and the public sphere in relation to the urban environment, its users and residents. Following ANA’s curatorial principle of forging connections, the ANA LOCAL artists, in addition to making their own productions, are included in the network around ANA AIR and in the development of the Children’s Studio programs. In this way we provide space for inspiration and new spontaneous and collective productions. Across the arts, in pairs or individually, the visual artists, performing artists, poets and musicians create concerts, readings, performances, exhibitions and hybrids of these.

ANA CHILDREN’S STUDIO is an initiative that includes projects which enable youth to explore their neighborhoods and environments through personalized, multi-sensory methods supported by artists in the areas of movement, sculpture, storytelling and sound. We have also been working with the local area youth centers to support creative programming in the area of Nørrebro.

ANA FORUM processes and reacts to activities within the other three programs (ANA AIR, ANA CHILDREN’S STUDIO and ANA LOCAL) through discussions, forums and other participatory platforms. The purpose is to collect and share knowledge, stimulate dialogue and create shared experiences with other participants. It is also a way to connect the arts, business and citizen realms. ANA FORUM calls for debate on the public’s role in society, in order to pave the way for opportunities for active participation and a re-assessment of the citizen’s position in society. ANA FORUM examines the places all around us in which aesthetics meets ethics, policy and society. Artists and thinkers are invited to curate and facilitate debates, workshops and larger seminars.

Astrid Noack (1888-1954) is one of the most important Danish artists of the 20th century. As a sculptor, she was inspired by the French tradition through her teacher at Maison Watteau, Charles Despiau. Her work is characterized by sobriety and the scarcity of funds, and is exemplary of the archaic mode in sculpture.

Astrid Noack’s Atelier is artist-run initiative and space working from a backyard building, where the sculptor Astrid Noack lived and worked lived from 1936 to 1950. To learn about ANA please visit: astrid-noack.dk

Lise Grüner Bertelsen (1988) is a curator for The Winter Office, writer and assistant editor at Really Simple Syndication Press. She holds an MA in Modern Culture from the University of Copenhagen, and lives and works in Copenhagen.

The Winter Office (TWO) is an artist group and work network consisting of artists, curators, architects, designers and social scientists based in Copenhagen, founded in 2010 by artist Hugo Hopping and architect and city planner Johanna Ferrer Guldager. For more, please see: thewinteroffice.net

A warm thank you to Nina J Gallery in Copenhagen for the loan of Astrid Noack’s artworks.