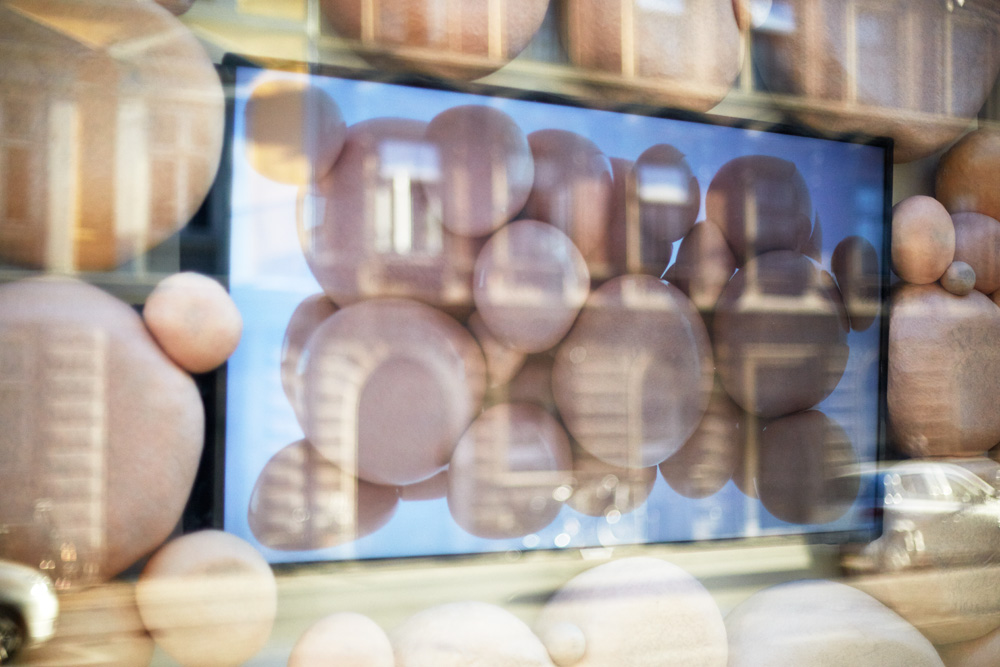 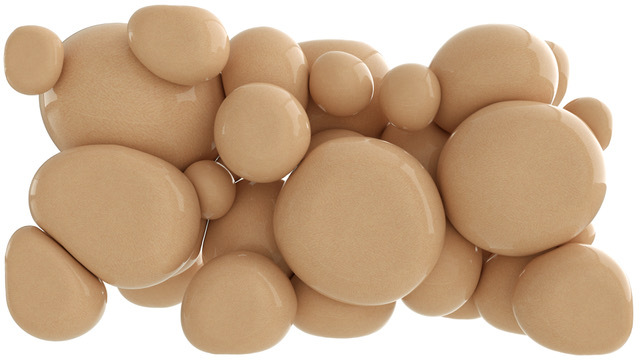 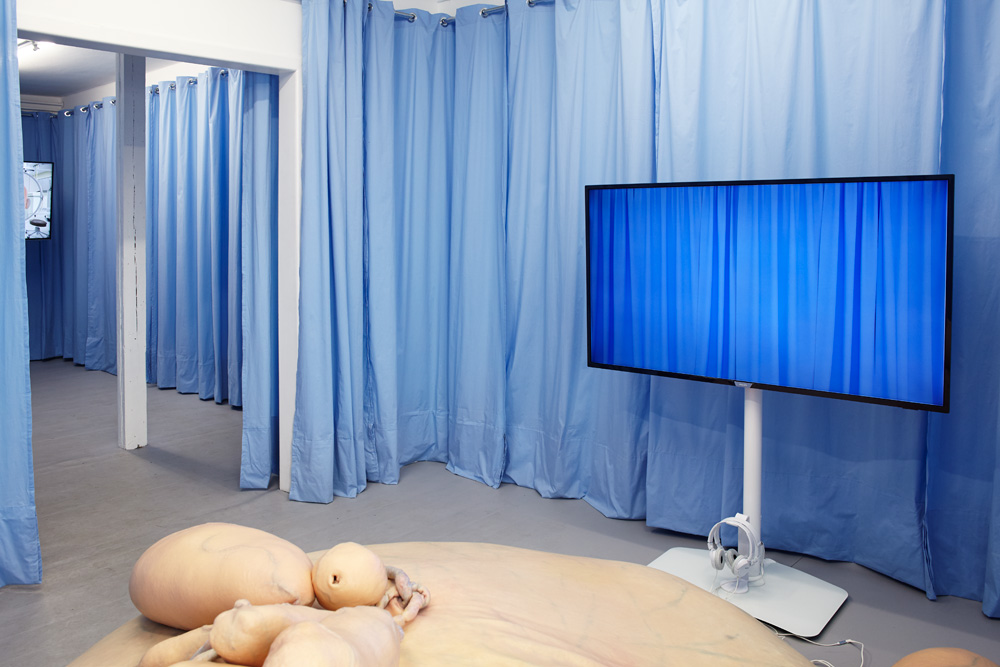 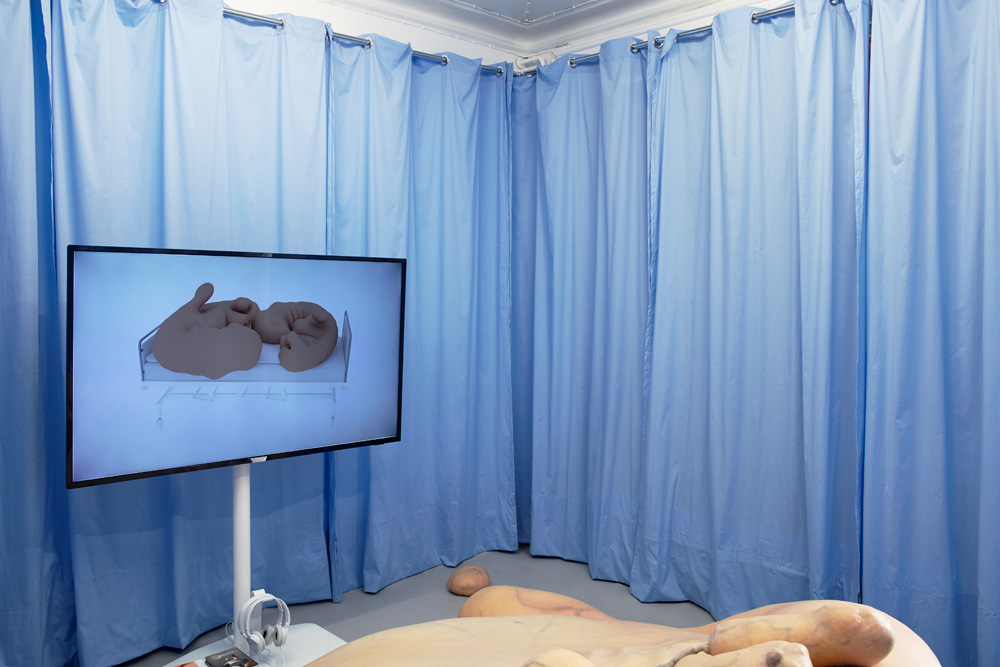 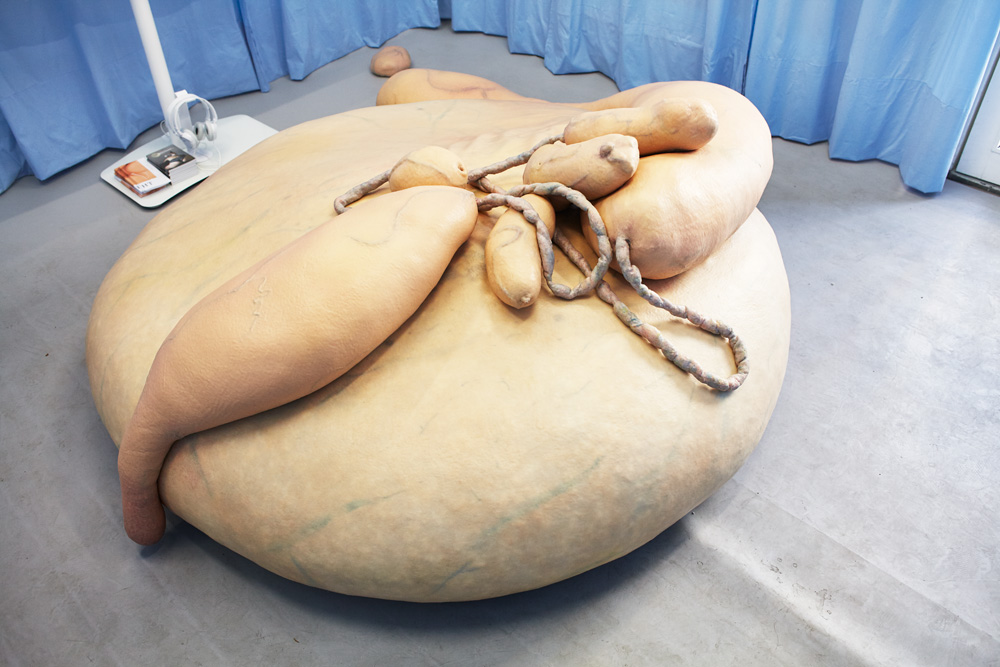 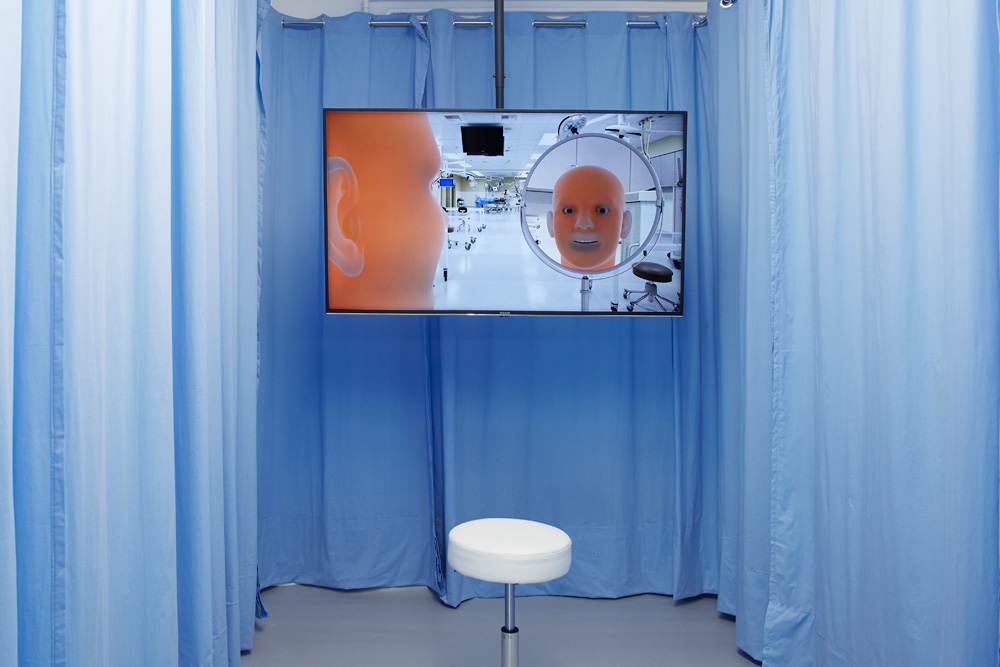 SixtyEight Art Institute is very pleased to inaugurate a new two-year exhibition cycle with the opening of Synthetic Seduction that is the result of a collaboration between two London-based Danish artists, Stine Deja and Marie Munk. Through video and sculpture, the exhibition creates a playful and interactive environment that examines the influence of technology on our innermost experiences.

With a shared interest in how technology alters social behavior, especially in the way we are intimate or present with each other, Deja and Munk take on the question framed by the transhumanist thinker Mark O’Connell, who asks: “Can a machine learn to be a human?”

Through a futuristic laboratory setting, simulating the proverbial hospital room, Munk introduces palpitating and fleshy interactive sculptures – loosely resembling in utero or newly born creatures – that engage artificial forms of physical connection. Each is animated in its own unique fashion via acts of breathing, pulsating, singing, speech, or movement. The sculptures are shown along with three video works by Deja, which stage a playful contrast between algorithmic logic and romantic clichés to draw attention to the patterns at the heart of our most personal and supposedly human-specific, behaviours. Together, the works reveal how it might feel to substitute real intimacy for an artificial version of the same thing. In this way, they invite an exploration of the uncanny.

The title of the exhibition was inspired by Sherry Turkle’s theory of how technology seduces us, making emotions “easy” by offering human relationships without the complexity of being together ‘face to face’. But if machines can become attentive and emotional, what is left to distinguish us as human beings? We are facing a paradigm shift in how we understand ourselves physiologically, as data and algorithms, and are being forced to question the role of our biological body.

As the relationship between artificial and human intelligence becomes increasingly intermingled in our everyday lives, Synthetic Seduction provides immersive and timely insight into the limits of human empathy and intimacy. We are glad at SixtyEight Art Institute to host such a space for thought. We hope it will start conversations and maybe even encourage some intimacy among our visiting audiences in the coming weeks.

Marie Munk is an interdisciplinary artist based in London, working with sculpture, installation, video and performance. She received her MA from Royal College of Art in 2016 and a BA in fashion design from Kolding School of Design in 2013. Munk examines the materiality of physical interaction and artificial simulation of intimacy. Using silicone as a metaphor for the bodily, Munk creates alternative realities, which question current tendencies in society.

Stine Deja is an interdisciplinary artist based in London. She received her MA in Visual Communication (Moving Image) from the Royal College of Art in 2015 and her BA in Interaction Design from Kolding School of Design in 2012. In an age of digital dependency and mass migration to ‘virtual’ spaces, Deja explores the overlaps and gaps, the malleable borders of the ‘real’ and the ‘virtual’. She uses digital surrogates and narratives in her videos to emphasise the different ways that we have become distanced from ourselves and other people. A lot of Deja’s work focuses on the irony and melancholy in modern social interactions and our society.

Rebekka Elisabeth Anker-Møller is an independent curator with a cross-disciplinary set of interests in art concerning new media, social structures, gender and performativity. Especially looking at how these intersect our digital age and virtual environments. She is also one of five people running the Copenhagen based exhibition space, RØM, which has been exploring notions of temporality and site-specific contexts through their exhibition work.